Why It Matters to the U.S. Freight Market

Other than genuine interest or idle curiosity, why should you care about the festivities of cultures halfway across the globe? If you work in the supply chain, you know well the answer to this question. The fortnight of manufacturing shutdowns can cause significant disruptions in the Western world when production comes to a grinding halt and there is no one available to contact about the status of pending orders.

Manufacturers and retailers are familiar with this inconvenient time of year and have always been able to plan accordingly. In 2020, however, the powers of the universe had different ideas. The pandemic hit China hard around the time of the CNY, followed shortly thereafter by the outbreak of COVID-19 here at home, provoking a rush on durable goods and causing catastrophic shortages in the U.S. supply chain.

There continue to be uncertainties about COVID’s spread this winter in China. Last year, the pandemic forced factory workers to stay home as many manufacturing facilities shut down. This fear still lingers.

There is particular concern over cases of the virus escalating after the CNY, similar to what happened here in the United States after the Christmas holiday. If the U.S. pattern repeats itself in China, we could be in for another significant supply upset.

What to Expect this Chinese New Year

Now that we are a stone’s throw away from the annual festival's shutdown-time, what can we expect this year and how can logistics professionals cope with the kind of uncertainty we all faced in 2020?

Here is an example of the 2021 Chinese New Year schedule from one supplier:

Quality control issues tend to pop up immediately following the return of Chinese workers after the holiday since orders are backed up, and in some cases, the full workforce has not yet returned. This is the time to make sure your quality control team is on the lookout for problems and carefully reviews all new orders coming in for irregularities and mistakes. 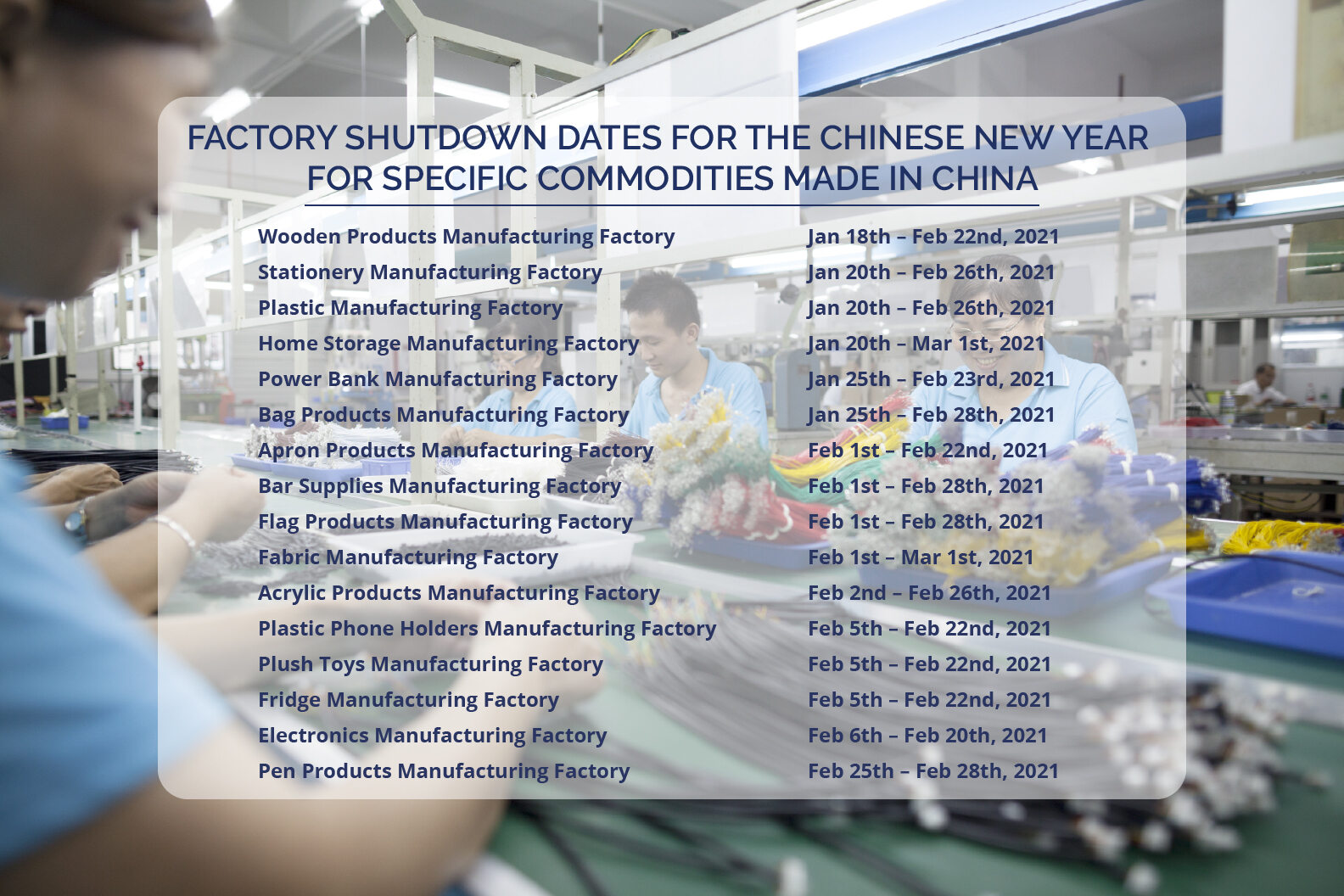 It wasn't until 2011 that China surpassed the United States as the world's top manufacturer, driving growth of the nation's GDP by 40%

Here are five suggestions to help get you through this year’s potential CNY bumpy road.

Even though factory closures do not start until early February, getting your orders into the production schedule by mid-December should be your goal. If you didn't do it this year, put it on  your schedule for this coming December. It is the country’s busiest time of year and everyone is placing orders early. Advanced planning gives your vendor a chance to procure their raw materials in plenty of time to get your order into production and shipped out before holiday shutdowns.

You can count on approximately two full months of non-manufacturing time during the CNY. This means you will be without any new replenishment stock for at least 60 days, plus some travel time once it gets to the United States. When you place your early orders in December, bulk up and order plenty of back up inventory.

Not all vendors function the same, and they get back up to speed after the holiday with varying degrees of alacrity. There also may be outside factors to consider causing further delays, such as another rise in cases of the virus creating more workforce shortages. By adhering to steps one and two, early planning and bulking up inventories, you should be able to keep well stocked until your vendors are running at their full production levels again, which sometimes can be as long as three months.

#4. Source and Use Alternate Suppliers

It is always good to have alternative suppliers for your products, or as they say in finance, a diverse portfolio. Source a few new vendors and try them out during the summer months to evaluate the quality of their products and level of service. They may be a little more expensive, but if all is good, put them on your alternate supplier list for January, February and March orders just in case. It only makes good business sense to have a backup, even in the best of times.

As mentioned earlier, when workers come back after the CNY, they face a huge backlog of orders that often require expedited delivery. With the rush to get orders processed, mistakes happen, and quality suffers. There are notably more flawed products delivered in the first weeks after the holiday than before it.

Make sure your company’s quality control department is on high alert during this time to catch these higher-than-normal cases of errors in production. It could save you a few customers.

Some supply chain professionals think that just-in-time shipping is a thing of the past and that a set of new best-practices will emerge requiring manufacturers to order backup supplies as much as six months to a year in advance.

No one wants to get caught empty-handed, nor can anyone afford it these days. Unless any significant strides are made in re-shoring efforts, (which is unlikely due to U.S. wage disparity and labor skills), this may well be the preferred course of action for many going forward.

Does the Chinese New Year affect your business, and how do you prepare for it?