It is always surprising how a garden planted with the same array of annuals and perennials every year can look entirely different from one Spring to the next. It all depends on rainfall, temperatures, soil nutrients, and a multitude of other factors, but that is the beauty of it! Every growing season is uniquely it is own.

For wholesale nursery growers, their seasons can be just as temperamental, but with much larger consequences. Choptank works with hundreds of nurseries across the United States to help get their live plants to market, in good condition, and at reasonable rate

s. Since Mother's Day is coming up and nursery freight is in full swing, we thought we would check in with several of our nursery and landscape shippers in states like Alabama, Maryland, Ohio, and Pennsylvania, to see how the 2021 season is shaping up so far.

If the early signs are any indication, spring of 2021 is turning into an exceptional year for nursery growers, even though they are experiencing lingering COVID-related challenges. In 2020, most of the workforce was made to shelter-in-place, so one of the favorite pastimes became gardening, which meant a busy season for wholesalers dealing in plants and flowers, but apparently, that was just the tip of the iceberg. 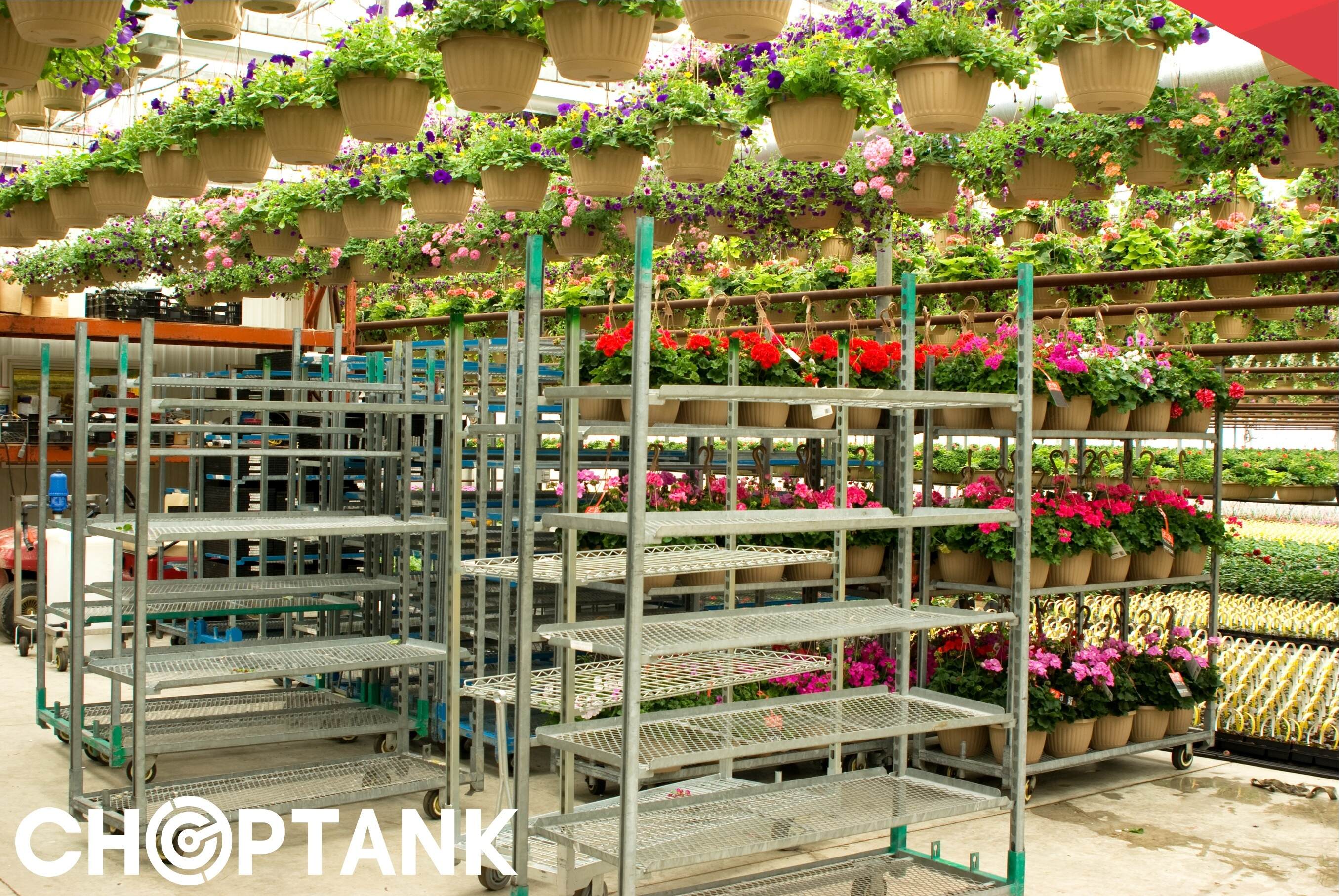 Karin: (Alabama) “Companies that offered online services last year saw an increase in business that went through the roof. This season we are seeing even bigger sales numbers across the board, not just for us, but for everybody.”

So much so, Karin said it has been tough keeping up. “Normally our turnaround time for delivery is very quick—the next day or two at most, and never, ever have we been more than a week out, but this year we are two and three weeks out trying to get plants delivered. I’ve never seen it like this, and I’ve been here a long time.”

Chrissy: (Ohio) “Generally speaking, everyone is short on product and what we do have available is selling out quickly. I do believe COVID has a lot to do with that. My husband worked part-time at Lowe’s last summer and he said every day was crazy busy [in their nursery department].”

Finding trucks has been somewhat of an issue though, especially with the Conestogas. “There just aren’t a lot of them available this year. Flatbed carriers with side kits and nursery tarps have always been a struggle, probably because of the time it takes to load and unload.”

Jay: (Maryland) “We are having a very busy spring.”

Alex: (Pennsylvania) Alex agrees with the other nurseries. “Yes, the demand has changed drastically. We went from zero when the pandemic started, to massive demand ever since.”

Tight capacity has been a subject of great concern for all shippers, not just nursery ones. With rates near all-time highs, many shippers are frustrated.

Alex: “In our business, we work 8 months out, and in some situations, a year or more.  It is very hard to pass costs on to our customers. We mainly have had to absorb it. In short, trucking [industry] has been terrible.” Alex goes on to say that the rates he is getting are not sustainable and feels that everyone is overpaying for services that have only gotten worse, not better.

Karin: Finding trucks has not been a big issue for Karin regarding their dry van shipments, but the reefer units are a little harder to come by. “We can fit more in a dry van, so we try to use them whenever possible, but some shipments require reefer units.” Making the truck search even more difficult, Karin notes that some of their customers require trailers with lift gates because they do not have a forklift or a bobcat on-site, and that narrows down the pool of available trucks even more.

But the most common problem nursery shippers are facing is rising costs. Karin said, “We have been getting some outlandish rates from carriers… upwards of seven to eight dollars a mile for reefer freight. We had one load going from Atlanta to Cairo which is only a four-hour trip, and we were quoted $7/mile. The average rates are definitely higher than we normally would pay. Plant prices are higher, fuel is higher, taxes are higher… everything is higher. We’ve had to raise our freight rates as well as our plant rates to cover the difference. At first, no one wanted to pay the higher rates but as time went on and people realized that plant materials are in such short supply, people got over it… they just wanted their shipment.”

Jay: “When our freight charges go up, our customer’s prices go up accordingly. Higher rates are being passed on to our customers.”

Chrissy: “Rates are up,” says Chrissy, and they use several types of equipment for shipping. “This time of the year, we are shipping our material in dry vans or on flatbeds. We also use Conestogas, but they seem to be few and far between this year! As the weather warms, we will move to reefers. We are a wholesale nursery that ships containerized shrubs, trees, perennials, and grasses, as well as balled and burlapped shrubs, trees, and evergreens – hand-dug and machine dug. Our material is floor loaded and occasionally we will rack material if a customer requests it.”

Karin: (Alabama) When freezing temperatures and ice storms hit Texas, millions of dollars of damages occurred to many of the state’s crops. According to Karin, there was an effort to have nurseries participate in a “bail out” to help all the Texas nurseries who had to replenish their pre-season losses. “Since nursery stock was now so scarce, we made a conscious decision not take on any new customers so that we could continue the same level of service to the customers we already had in those devastated areas.”

Nurseries start growing their spring plants in the fall, and 2020’s hurricane season last year was especially brutal. Hurricane Laura was the most memorable, hitting the coast of Louisiana and causing the most damage out of the twelve storms that made landfall. “We had three hurricanes hit almost back-to-back, and that created a lot of issues for us,” said Karin.

Chrissy: “Trees and shrubs are 7-10 days further along than in the past at this time of the year. There is a very small window/time frame when material, mainly trees, can be safely dug without risking damage to them.

We had some very warm and unusual weather in March. Temperatures of 70+ degrees started “waking” things up. Once this process begins, it becomes crunch time to get orders out of the ground. We normally don’t see those kinds of temperatures until mid-April.

On the other end of the spectrum, just last week we got some pretty heavy snow that we know caused some damage (driving into work & in our own neighborhoods there were a lot of downed tree branches). Just how extensive the damage was to our stock is yet to be determined. We need to wait until all the snow melts, and we can get into our fields to survey.”

Nurseries, like most other businesses, are reluctantly passing on these rising plant and freight costs to their customers. What are they doing to help keep pricing down?

Chrissy: Like most shippers, Chrissy’s company makes every effort to keep costs down for their customers. “We try to combine customers that are in the same area to get them the best rates. On occasions, we’ll also work with other nurseries to combine loads.”

Karin: Working on internal efficiencies is one of Karin’s priorities. “Every year we have to rent cc-racks from a company in Florida. One of our cost issues is not getting this equipment back once the plants are delivered. If the racks are left at a destination, we still have to pay the rent on them until they are returned, which is costing us money. We are working with our carriers to make sure these racks come back in a timely fashion.”

Alex: “In terms of mitigating higher rates, we work with brokers who can make commitments further out.  I should be able to go to a broker with 100 loads for my busy season, or holiday season, a couple of months in advance. Once I secure the order, they need to show commitment to that. Over the years the up and downs level out to make it worthwhile. I do over 6,000 loads of my product, mainly the same warehouses weekly, and the same peaks for holidays.  A commitment on these a couple of months out put a broker or private company at the top of my list.”

Another challenge for some nurseries this year has been employment. Available jobs are at an all-time high since the beginning of the pandemic, and especially since the vaccine became more widely administered. Many, however, are still not willing to work in jobs that put them in close proximity to others. Others think the problem is larger than that.

Karin: “We’ve had a heck of a time with hiring. Even though we have several openings available, and we can’t get anybody. As long as the government is paying people to stay home, they are going to stay home. In the next county over from ours, I saw an ad for at least 100 openings, and they just can’t fill the positions. It seems like no one wants to work.”

Jay: Employment has not been an issue for Jay’s nursery. “Many of us have been vaccinated and we are part of the federal government’s H2A foreign worker program with Mexico. It works well for us.”

Chrissy: “Several nurseries in our area reached out to our local Health Dept to have a mass vaccination distributed/administered to any employee wishing to be vaccinated. We were contacted the day prior to the vaccines being given with a number of doses available and a location. We had several employees take advantage of this and I am hearing that most of the surrounding nurseries did as well.”

“We also participate in the H2A program to hire a legal workforce. Our contract is 9 months, and that runs from March through November. Ninety-nine percent of these employees have been with our company for 20+ years.”

Chrissy goes on to say, “We have had zero inquires or walk-ins that come to apply for work. I have had several conversations with some of my landscape customers and they tell me “good workers are hard to find.” One told me they were paying $17/hour to cut grass. Then, when someone is hired, they show up for a day or two, and are never seen again.”

Despite the challenges of this year’s season, growers seem pleased with the elevated demand for their products and services and are looking forward to a prosperous year. They have proven to be a resilient bunch. It does sound like some stock is in short supply so if you are planning more extensive beds this year, it might be a good idea to get into those garden centers and box store nursery departments early!

A note from Choptank Transport: Nursery shipping is a specialized service that not every 3PL can provide. Choptank has excelled at shipping nursery freight for more than three decades. We have experienced truckload and LTL nursery freight representatives available for whatever your needs may be this season. Have questions? Contact us today.