Putting the Brakes on Cargo Theft This Thanksgiving

As the news continues to be saturated with images of overflowing containers and clogged ports, the public is getting used to hearing that the world’s supply chains are a hot mess – but the situation this fall has become more alarming than ever. Delayed and missed deliveries have become the reality for many Americans, and prior expectations have slipped, even for next-day delivery junkies. As the world’s consummate consumers, we are becoming surprisingly tolerant of what seems like a long-term state of affairs.

What happens, though, when a shipment is not just delayed, but it never arrives? The last thing a shipper wants to believe is that their freight has gone missing and possibly has been stolen. Unfortunately, it can and does happen.

Thanksgiving and Christmas are two times of the year when cargo theft happens most often. The holidays are a time when people are preoccupied with having time off and are anxious to get home to their families. In other words, they are often off their game, which means letting their guard down and creating a perfect opportunity for freight crooks to do what they do best.

The graphic below is based on CargoNet's past 5 years of data. CargoNet is a unique solutions provider that helps its members collectively share information between law enforcement, victims of theft, and shippers and receivers to recover and prevent stolen freight. In addition to the holidays, the COVID-19 crisis created more opportunities for nefarious activities to escalate around loading docks and truck stops. Bandits and thieves have always used times of crisis to strike. When the pandemic first hit the United States, property crime investigations quickly became a low priority as motor carrier law enforcement officers were much too busy with a reduced workforce and other pandemic-related issues. This didn't go unnoticed by criminals and it gave them an incentive to ramp up their efforts.

THIS IS WHY YOU SHOULD CARE

In one case reported by CargoNet, a shipment of critical medical supplies destined for first responders was reported stolen in Davenport, Florida. The truck was equipped with GPS tracking. Fortunately for the driver, the thieves had not been successful in disabling it. With the coordination of multiple stakeholders, the authorities were able to locate the trailer just outside of Miami and recover the goods, which were hidden in the brush near the location of the GPS ping. Today's tracking capabilities are critical in helping the recovery efforts of stolen freight. In this case, the shipper avoided losing a load valued at $440,000 due to simple GPS technology.

In another case study provided by Emerson (a cold chain climate technology solutions provider that offers temperature monitoring controls and devices that often help locate cargo when other methods of tracking fail), one of their distributor's shipping customers had a full truckload of nuts, weighing 40,000 pounds, valued at $240,000. The truck had standard GPS tracking on it. When the road bandits pulled over the truck at gunpoint, the GPS recorder noted the unexpected stop of the vehicle, but soon after, the robbers jammed the signal and the truck’s location disappeared off the GPS. Luckily for the shipper, they had the foresight to include an additional onboard Emerson tracking device which continued to monitor the whereabouts of the truck. Within ten miles of the original theft, authorities we able to apprehend the perpetrators.

Internal, covert tracking devices in conjunction with standard GPS tracking have saved shippers from thousands of dollars in potential losses. For high-value freight, extra security measures like this are highly recommended. THE UNEXPECTED PROFILE OF A FREIGHT THIEF

The average person probably assumes that cargo thieves are just regular street crooks. Statistics show, however, that they are predominantly truck drivers who own their own trucks and are willing to drive hundreds, even thousands of miles, to steal freight and then disappear. They know how GPS systems work and are capable of jamming the signal. They also are more likely to have a buyer for their stolen goods before they make the decision to steal anything.

HIGH-THEFT AREAS THIS THANKSGIVING
Some areas of the country are more prone to theft than others. CargoNet's most recent reporting shows elevated activity in the Southeast, the Eastern Seaboard, and the Midwest, which all have been reported as areas where your drivers should be on high alert. Truckstops have been prime targets of activity, especially along the major arteries of these regions, but secured yards, warehouses/distribution centers, and parking lots are also common crime scenes.

HIGH-THEFT COMMODITIES
According to CargoNet, there are certain high-value, sought-after items that benefit from extra security because they are frequently targeted commodities, such as pharmaceuticals, firearms and ammunition, consumer electronics, designer apparel, alcoholic beverages, metals, and tires. The loss of a single stolen truckload of freight can cost a shipper hundreds of thousands of dollars. The average loss over the last five years of Thanksgiving holiday freight is $128, 276. 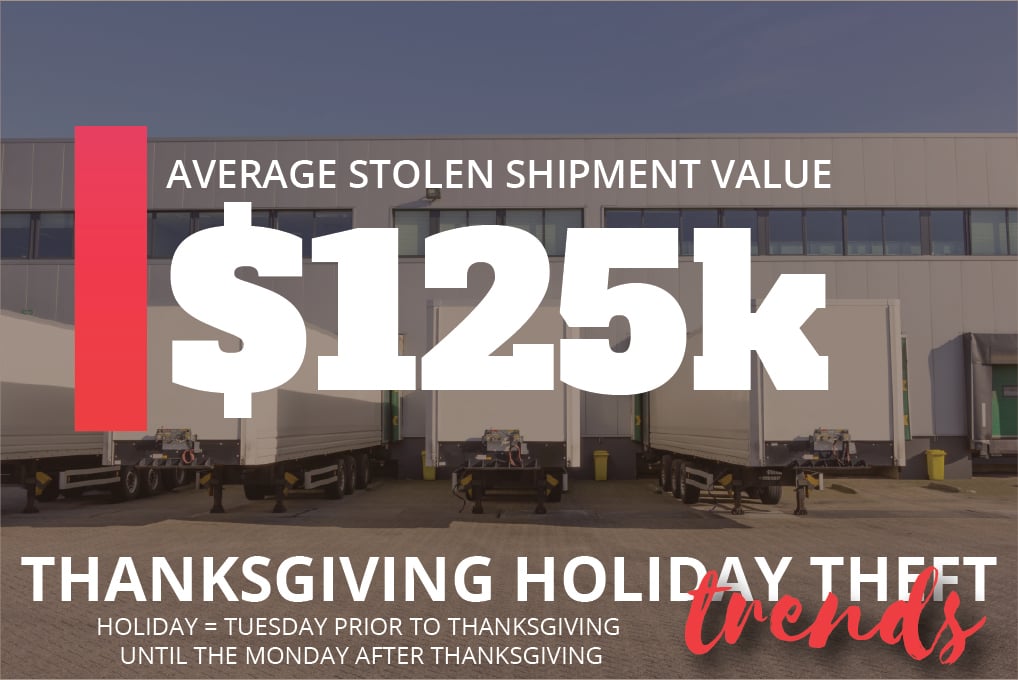 Source: CargoNet (Based on CargoNet's last 5 years of data.)

There are steps that a shipper can take when shipping high-value cargo. These important, fail-safe measures should be put into place when the freight is picked up, when it is in transit, and when it arrives at the warehouse.

Also, warehouse personnel should always be leary of a truck driver who is eager to take a load for a below-standard rate, especially if the shipment is an undesirable one. This should be a red flag.

Other types of theft such as fuel advances, line haul scams, and hostage loads also increase during the holidays. It is advised not to take incoming calls from ‘shippers’ who are not really shippers, saying the driver is there, when it may be a con.

And lastly, when a driver arrives for pickup, best practices suggest that they should have already eaten, be well-rested, and have a full tank of gas.

It is a common practice for thieves to purposely trip alarms before making the big heist. Like crying wolf, this puts warehouse security off-guard, thinking it is just another false alarm. Always be sure to check the premises no matter how many times the alarm goes off.

Also make sure all keys to warehouse equipment (such as pallet jacks and forklifts), as well as entrance doors and storage areas, are never left out and are kept in a secure location.

Other preventive measures include testing alarm systems frequently and making sure all surveillance cameras are in good working order. Other security assets such as perimeter fences and motion-sensor lighting should be checked regularly.

It can also be helpful to ask local police or security firms to make more frequent drive-bys during the holidays. Be sure to record any suspicious activity so that if theft occurs, this information can be accessed and used in an investigation. Source: CargoNet  (Based on CargoNet's last 5 years of data, 2020 saw the hightest number of thefts, coming in a 40.)

At Choptank Transport, we recommend everyone in the supply chain stay especially vigilant this Thanksgiving weekend, especially with the delays and backlogs that are conducive to shipments sitting longer than usual. Taking a few extra steps to make sure your cargo stays safe can save your company not only the fiscal recovery costs, but the embarrassment of losing a load, and the headache and inconvenience of filing a freight claim. (See how you can get the most reimbursement for your freight claims).